Follow the adventures of our not-so-heroic band of misfits in their travels around the world as they get themselves into (and out of) various kinds of mischievous and sometimes idiotic adventures. 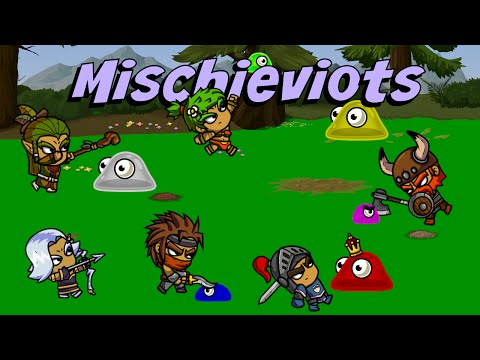 Their first adventure: “The Gathering”

This is their first great adventure. It places our friends scattered all over the place and have not yet met each other. Our “hero” finds himself being pushed toward helping out his town, since everyone else has run away or is hiding. With nothing more than pure dumb luck at his side, he decides to accept the quest and heads out into the world !

This is a complete mini-adventure containing about 2 hours worth of game play and comes to a conclusion after fighting the “final boss” at the end. You can rush to the end and get there sooner, but will likely find the fight difficult if not around level 8+ by the time you get there.

The adventure contains a single home town, forest and two interconnected caves. Each new map you visit introduces some new monsters, each being a bit tougher than the one’s prior.

The forest and first cave maps each have 15 chests hidden within them giving you all kinds of free loot! The second cave contains a small puzzle to solve and then finally the “final boss”. You can find a Vendor and Inn within the town where you can buy supplies and rest any time needed.

This is only the beginning!

There is going to be an on-going story of 6 more additional chapters, taking you on adventures focused on each of our friends while they explore the world around them. Then, one “end game” chapter that will take them onto one final adventure wrapping up everything together.

The next chapter “Dwarf and the Dynamite” is currently being planned and development for it will be starting very soon so stay tuned for updates!

Here are some of the key features currently available:

Mischieviots is a hobbyist Turn-Based 2D RPG project I’ve been working on for over two years. The majority of that time was spent building the “engine” for it and has been written to allow future adventures to be created without too much additional coding effort and potentially allow for future player modding. In the last few months I turned focus onto making this first mini-adventure to show off all the major parts of the engine.

It is written in Java using LibGDX and will be made available on Desktop, Android and iOS devices.

Also, don’t skip out on checking out our Gallery or our demo videos !